This page provides information and photos to aid in the construction of the Pinewood Derby Car Scale.  The focus for this page is on the hardware and circuits. Refer to the Software page for details on how to load the scale sketch (software) onto the microcontroller.

The following subjects are covered on this page:

BACK TO SCALE OVERVIEW PAGE

Most of the components listed below can be purchased directly from this site - visit the Store for more information.
‍

The following components are needed to build the scale circuit.

Microntrollers are defined by a variety of parameters: architecture, voltage, CPU speed, number of IO, communication protocols, memory, etc. Since it would be impossible to implement the scale with every microcontroller available, only the following microcontrollers will be supported (answer questions, provide schematics, offer PCBs, etc.):

NOTE: At this time there are no plans to expand this list.

Support for additional displays is planned.

Although optional, the scale PCB simplifies the construction of the car scale by providing mounting and wiring points for the various components including the microcontroller, the three load cell amplifiers and the TFT display. This allows the larger components to be mounted directly against the PCB reducing the overall size of the scale electronics.  Most of the instructions below refer to the use of the PCB - if this is not the case for your build simply refer to the schematic for the appropriate connections between each component.

Soldering: Basic soldering is required to attach all components, headers and wires to the PCB.  If you are new to soldering here are a few suggestions:
- Search YouTube (or your favorite video site) for videos covering the basics of soldering components to PCBs.
- Start with the power jack, switches or resistor - they are the most heat tolerant.
- After soldering a component trim the excess leads (or header pins) to just above the solder joint.

Order of Construction: For the most part the order in which the components are placed on the PCB doesn't matter with one exception - the TFT display. Once the TFT display is attached to the PCB it effectively covers the mounting points of several components including the microcontroller and all three load cell amplifiers. For a successful build the TFT display MUST be installed last on the PCB.

The color of the PCB may vary from the pictures on this page. The instructions below refer to the top and bottom of the PCB, here is how to tell which side is the top and which is the bottom:

The picture below shows the microcontroller and load cell amplifiers mounted on the bottom of the scale PCB. Note the orientation of each component in relation to the scale PCB. 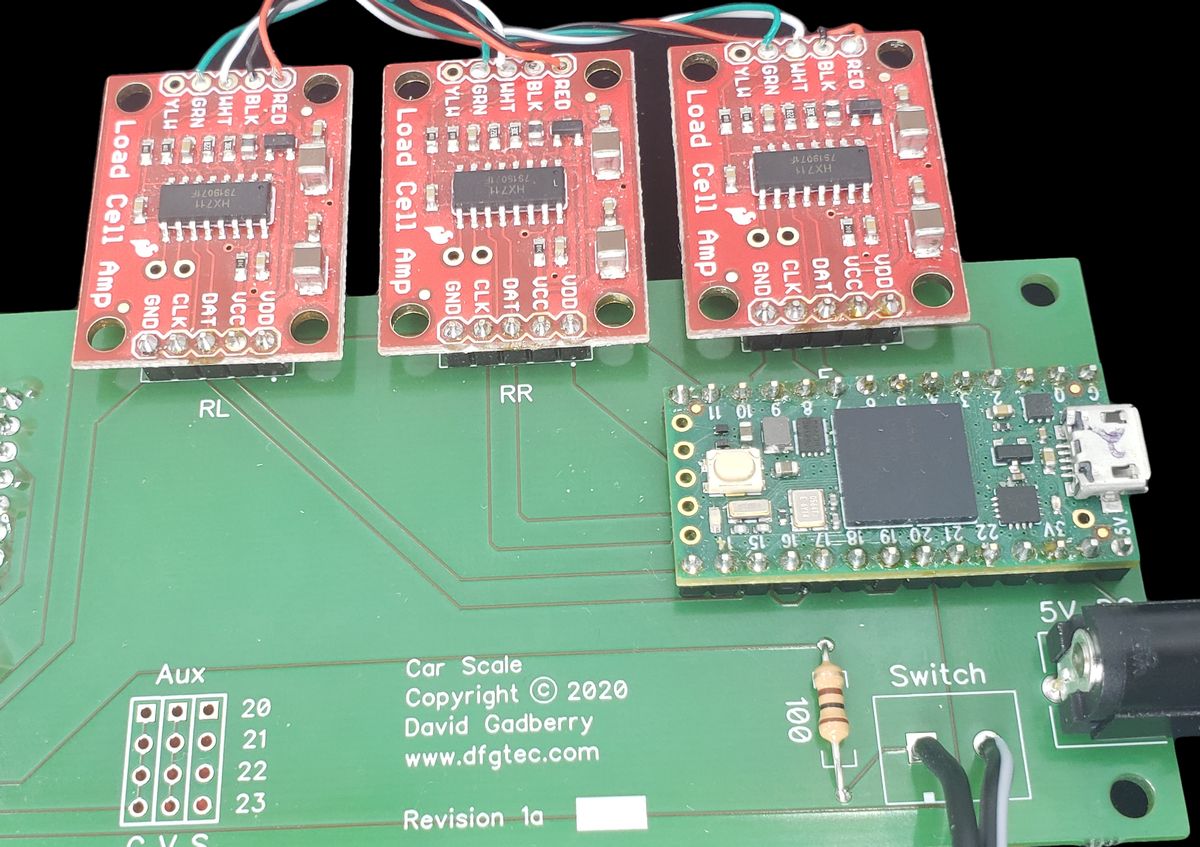 The microcontroller (Teensy 4.0) has 5 pin holes on the end of its board (opposite of the USB connector), a header does not need to be added on that end.

The DC power jack and resistor are mounted in the designated location on the bottom of the scale PCB as shown in the picture below. If a power switch is desired - when putting the scale in an enclosure, for example - it can be wired to the Switch connections on the bottom of PCB near the DC power jack. If a power switch will NOT be used simply jump the Switch connecters together with a short piece of wire. 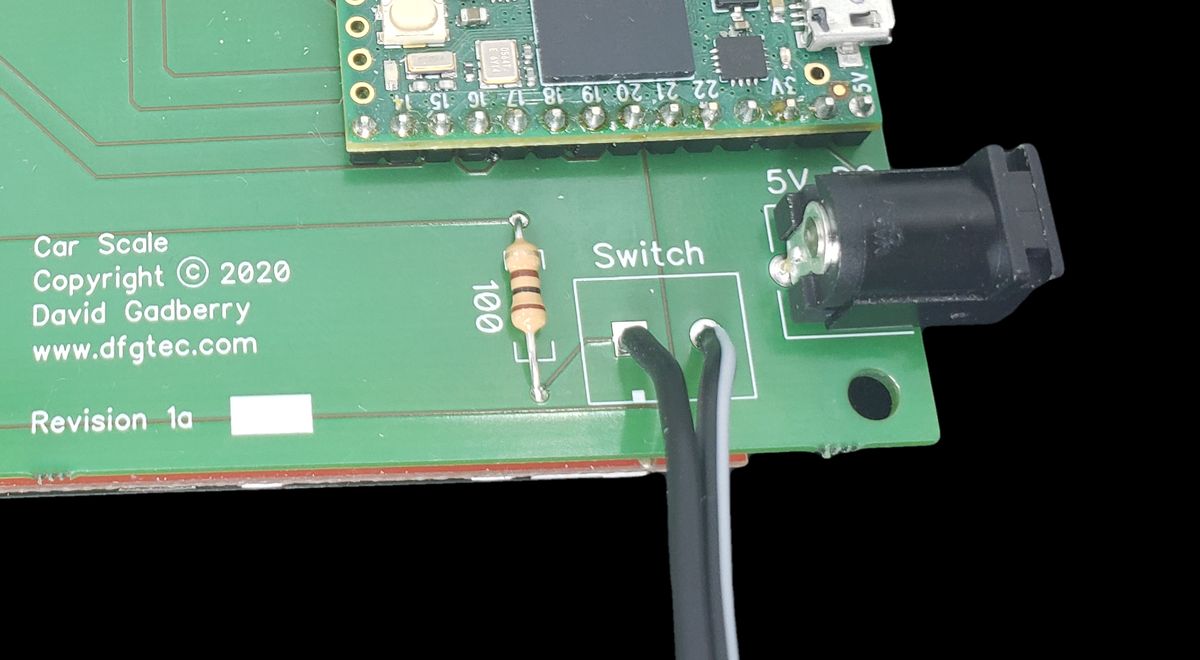 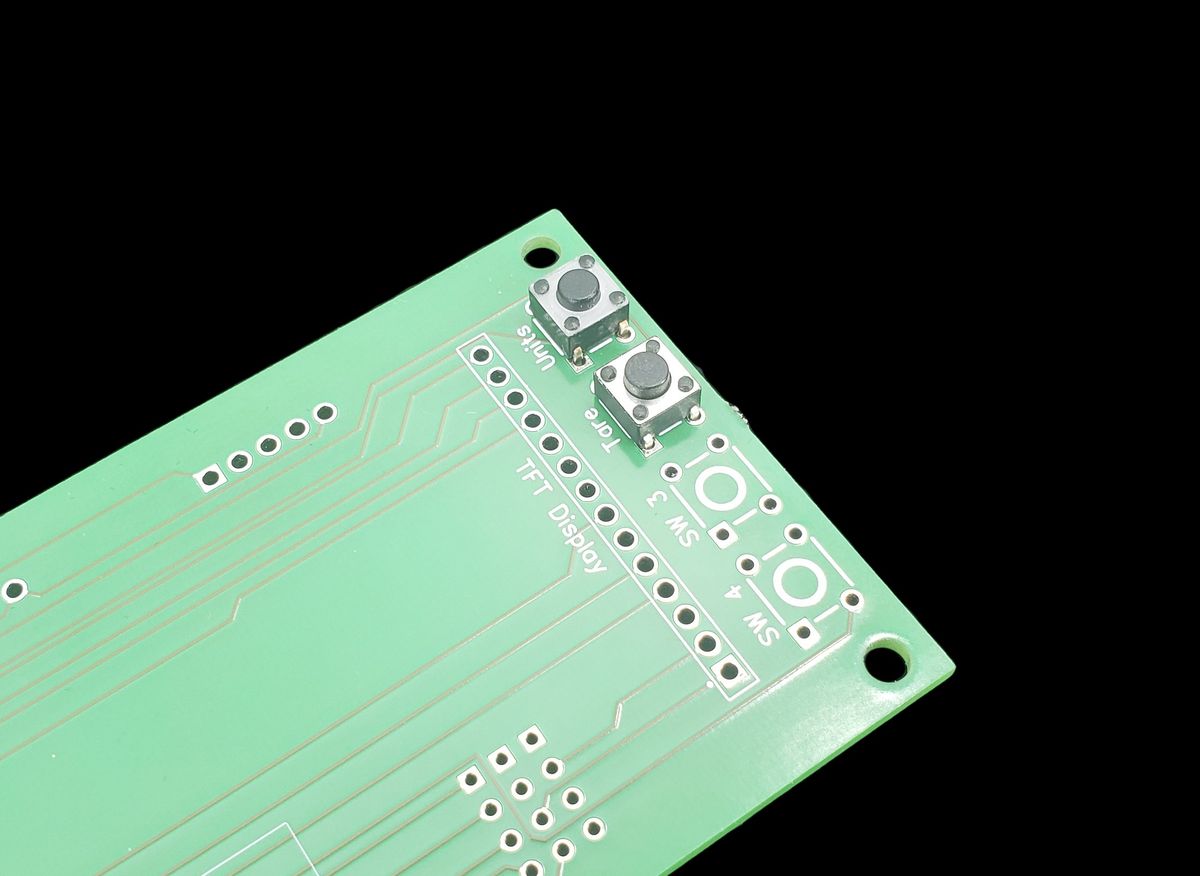 The TFT display is mounted on the top of scale PCB utilizing the preinstalled 14-pin header. The display will not sit square on the scale PCB because of the SD card receptacle on the back of the display. Because of this use four 5mm board spacers to support the display as shown in the first picture below. The spacers will raise the display so that the 14-pin header does not touch the scale PCB - see the second picture - this is normal. 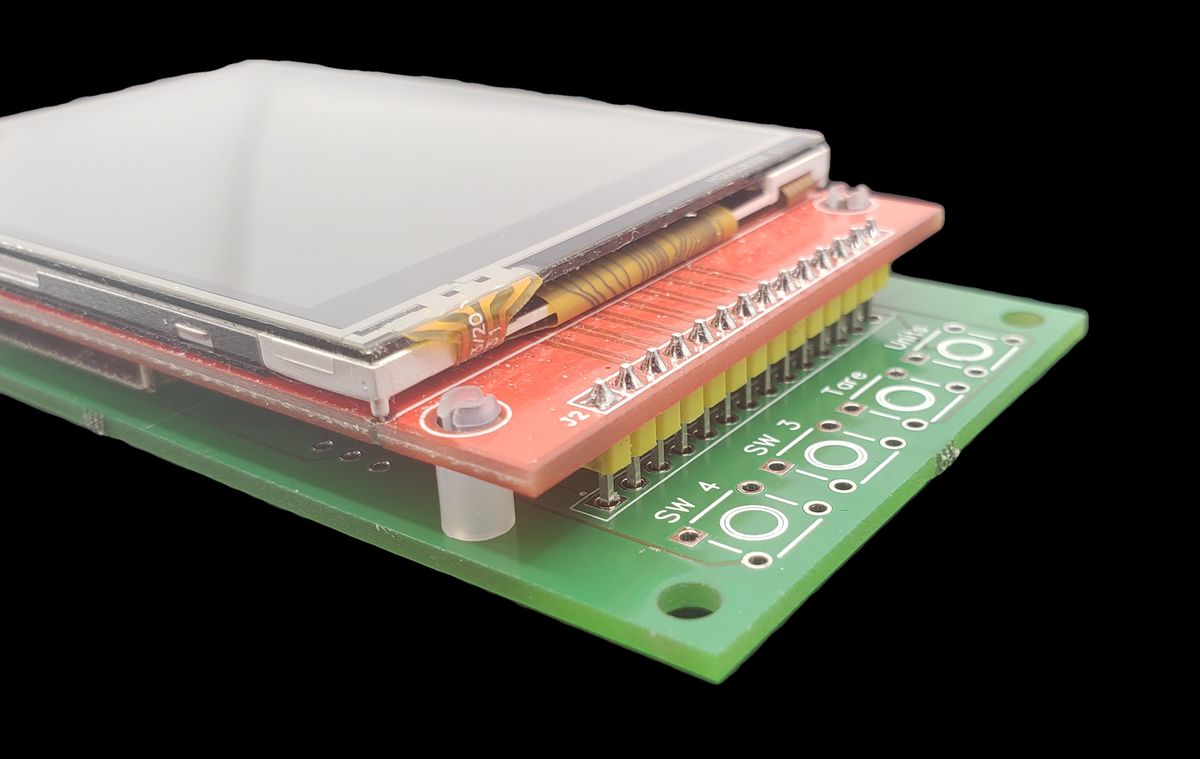 The load cells come with 4 wires pre-attached. These wires will be used to connect the load cells to the amplifiers as shown in the picture below. The wires are thin and somewhat fragile so take care when stripping them and soldering them to the amplifer. Match each colored wire to the corresponding labeled connection on the amplifier - note there is no yellow wire to connect. 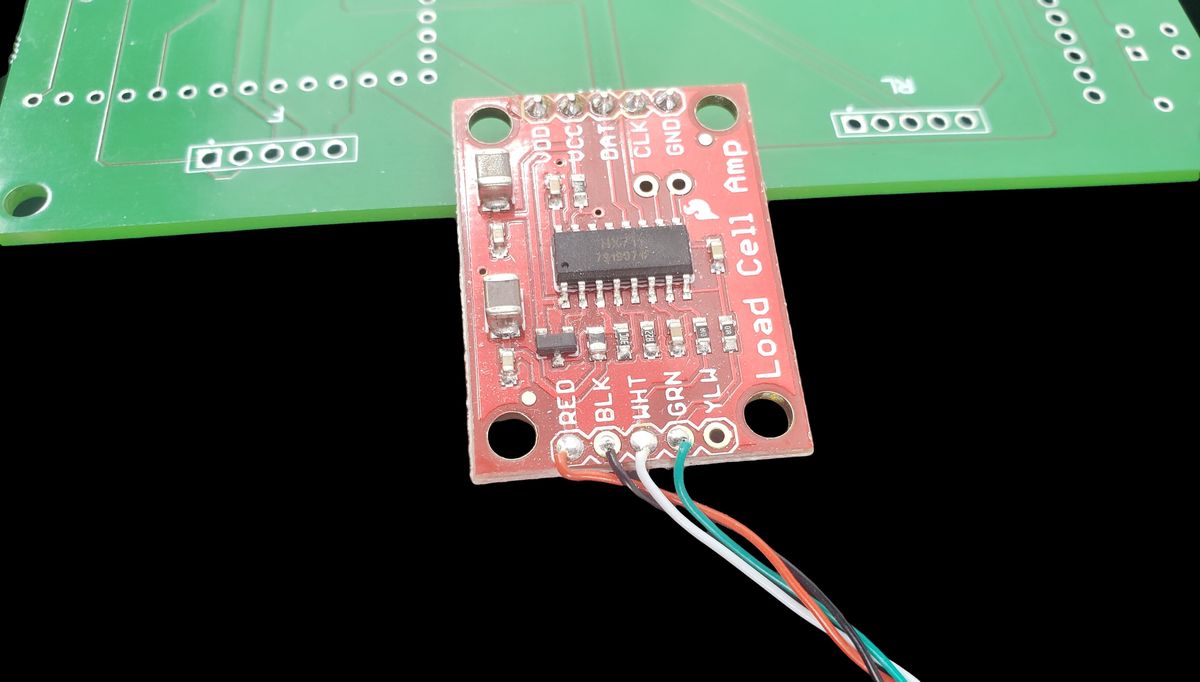 COMING SOON! Details and plans for building an enclosure for the car scale.